How Long Does Cocaine Stay in Your System?

Cocaine Addiction How Long Does Cocaine Stay in Your System?

How Long Does Cocaine Stay in Your System?

How Long Does Cocaine Stay in Your Body?

The amount of time that cocaine is still detectable in your body depends on how long you’ve been using, how much you used, and the type of detection method. Urine testing is the most often used testing method. Blood and saliva tests tend to have the shortest detection times, while hair tests have the longest.

Cocaine is an addictive stimulant drug from the leaves of the coca plant.1,2 It is a white powder that is a Schedule II drug, meaning it has a high potential for misuse but can be used by a doctor for legitimate medical uses.2,3 Cocaine can be misused nasally, via injection, rubbed onto the gums, or by smoking cocaine that has been processed to make a rock crystal (known as “crack”).1,4

Have you used cocaine recently?

Cocaine is a central nervous system stimulant that is quickly absorbed after smoking with plasma concentrations peaking around 5 minutes, or 30-40 minutes if taken nasally.5 Cocaine is largely metabolized by enzymes in the liver and blood, and benzoylecgonine is the major metabolite of cocaine found in the urine. Depending on the amount taken, how frequently it is used, and metabolic variation, benzoylecgonine can be detected in urine for 48-96 hours after use.5

One study found the average half-lives for cocaine to be as follows:6

The study also estimated that cocaine’s metabolites—or the breakdown products of cocaine—have a half-life ranging from 14.6-52.4 hours.6,12 This study suggested that chronic use of cocaine leads to a buildup of cocaine in the body, which increases the amount of time that cocaine and its metabolites stay in your system.6

Cocaethylene: The Danger of Combining Cocaine and Alcohol

Cocaethylene is a chemical metabolite formed in the liver and circulated throughout the blood after both cocaine and alcohol are combined.7,9 Combing any two drugs can be dangerous, but the combination of cocaine and alcohol creates a substance that not only has a longer plasma half-life than that of cocaine alone—meaning that it stays in your body longer than cocaine—but is has been associated with several problems and is linked to a much higher risk of immediate death.7

How Long Is Cocaine Detectable in the Body?

If you’re wondering how long after last using cocaine that a drug test will be able to detect the drug in the body, the answer to that may depend on:5,8,14 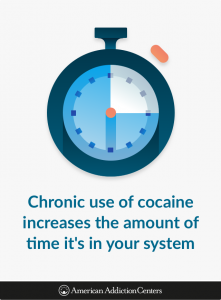 Cocaine and its breakdown products may be detected in 1 of 5 different ways—each of which has varying typical detection duration times after last use of the drug:14,15

Urine testing is the most often used testing method. It has a wider detection window than blood or saliva and also provides quick results.14 Hair testing has the widest detection window but is a complex process and  there are many factors that can skew hair testing results.9,14

In less than five minutes, see if your loved one—or you—is addicted to cocaine. Take our online confidential survey.

Your liver is the primary organ responsible for metabolizing cocaine. Cocaine is broken down into other compounds, although some cocaine is excreted unchanged. Most of the primary metabolites are not active.16 Benzoylecgonine is one of the major compounds that results from cocaine’s breakdown process and is, in fact, often screened for in urine testing along with cocaine itself.16

How Long Do the Effects of Cocaine Last?

The approximate amount of time that you will continue to experience the effects of cocaine varies by the route of administration—in other words, how you used it:17

Although cocaine users may initially experience feelings of pleasure, increased energy, alertness, and decreased appetite, cocaine can also have damaging short-term and long-term effects on multiple systems in your body.1,4

In the short-term, cocaine can give rise to symptoms including:1,3,4

Overdosing on cocaine may cause symptoms including:17

If you think you or someone else may have overdosed on cocaine or another drug, call 911 immediately.

Long-term use of cocaine may lead to a number of destructive health effects, including:1,4

1. Cognitive impairments, which may include:10

2. Increased risk of infection (including hepatitis C and HIV).

5. Mental health symptoms, such as paranoia and/or hallucinations.

6. Additional possible consequences are dependent on mode of use:

If you actively misuse cocaine and are ready to cut the drug and its negative effects out of your life for good, you will want to start exploring your options for treatment and recovery.

Treatment approaches for cocaine addiction include cognitive-behavioral therapy, contingency management, community-based recovery groups (e.g. 12-step programs), and therapeutic communities.1 Many factors can influence addiction, and treatment should seek to address those factors that are contributing to an individual’s addiction. Any co-occurring mental illnesses should be treated through therapy and/or medication. Treatment may be provided in a residential or outpatient setting.18

Many factors can influence addiction, and treatment should seek to address those factors that are contributing to an individual’s addiction.

Some treatment centers provide additional amenities to meet the desires of certain populations. Below are some descriptive terms you might encounter, although it is important to remember that this type of terminology is not regulated and could be used by any treatment center.

These options may be more expensive than traditional rehab due to the high-end amenities that luxury and executive rehabs may offer. Also, a person’s insurance may not cover these types of programs.

Data were collected in 2016 by Recovery Brands asking patients that were leaving an addiction recovery center what facility characteristics they viewed as valuable things to examine when looking at treatment programs. The highest-rated consideration was the program’s financial practices, for example payment options, financial support, and insurance accepted. They also placed a higher importance on the facility’s offerings (comforts, facility housing, food quality, etc.) much more after treatment. People looking for treatment may want to especially look at a facility’s payment policies as well as the program’s offerings to inform their final treatment decision. Read more